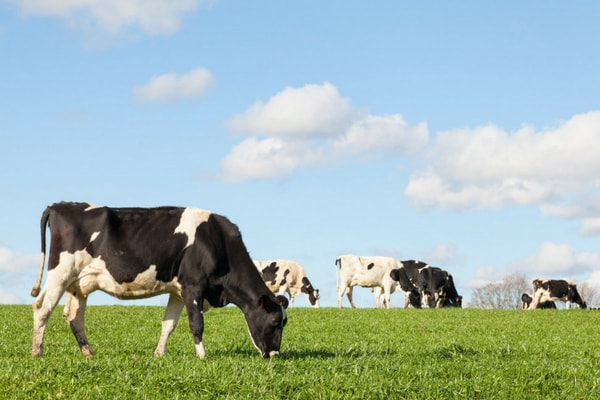 Holstein cows are a breed of large dairy cattle originating in northern Holland and Friesland. But these amazing cattle are now bred and shipped around the world for their amazing milk production. Read on for more facts about the holstein cow and its characteristics.

If someone asked you to picture a cow grazing in your mind, chances are you'd conjure up the image of a Holstein cow. Their black and white spotted coat is an idyllic representation of dairy farming worldwide.

Holstein cows originated in the Netherlands. The gold standard in dairy, they are prized the world over for their high milk yield.

There's more to this spotted cow than meets the eye. Read on to learn more about Holstein cattle, their history, and characteristics.

Origins of the Holstein Cow

Holsteins were selectively bred and culled for many years to ensure a stock that would make the best use of the area's abundant grass resources. This practice resulted in a hearty, efficient breed that is now used for dairy in more than 150 countries.

This breed has the highest milk production worldwide. Their achievements have no biological ceiling, and improvements of 1-2% per year are a realistic expectation.

Holsteins are equally suited to stabling or grazing environments. They are adaptable to grassland or mixed farming systems. Whether in high or low-lying areas, they do well in a variety of farming situations.

Calves of Holstein breeding are particularly fast growing, mature very early, and are easy to care for. When managed well, they have excellent fertility rates.

These cows are good-natured and resistant to stress. They function best in herds, as they are not solitary creatures. Whether stabled year-round or put on a bi-annual grazing schedule, they are comfortable and high-performing regardless of farming system requirements.

More than a dairy breed alone, Holsteins have also been used in the beef industry for hundreds of years. Especially when cross-bred with beef breeds, they yield excellent meat quality. While some regions use holsteins exclusively for milk production, other areas use them for both due to their versatility.

Australian Holsteins have an average lactation period of 305 days a year, with up to 18,000 liters of milk per lactation period. Their milk content is 3.82% fat and 3.21% protein. 9,256 Australian farmers utilise the Holstein breed.

Top producing individuals, milked three times daily, have been known to produce over 30,000 kg of milk in a 365 day period.

Because of AI technology, a single prize bull can father 50,000 female calves. Genetic tracking makes it easy to predict performance and quality in future offspring of any given sire.

Genetic refinement and testing also allow for dairy producers to evaluate genetic potential in their stock at a very early age. This helps them to make educated decisions on breeding pairs, which results in better offspring.

These genetic improvements help target desirable traits in the breed, such as heartiness, body size, and production levels. AI can also help target and spread specific positive attributes depending on if the calves are intended for the dairy or beef industry.

William Howard Taft, the 27th President of the United States, owned a prized pet cow from 1910 to 1913. Named Pauline Wayne, the presidential cow provided milk to the first family and was a popular fixture on the White House lawn.

A Wisconsin heifer named Gigi smashed the world record for milk output in 2016, producing 33,860 kg of milk in a 365-day period. This nine-year-old Holstein nearly tripled the production of her peers, far outperforming the previous record that was set in 2010.

Holsteins are the most valued of the cattle breeds and for good reason. The Holstein cow dominates the dairy industry in number and output across the globe, from Europe to China to America. Their long pedigree and specialized breeding make them a profitable investment for dairy farmers.

If you are looking for a reliable, even-tempered, adaptable animal that is well-suited for a variety of farming systems, Holstein cattle are the superior choice of the dairy breeds.

Australia's Livestock Exporters are one of the leading suppliers of dairy cattle worldwide, particularly South East Asia and the Middle East.

We know that quality is of the utmost importance to you. If you need a committed partner for your dairy business, Contact Us Today.

How to Import Livestock from Australia to Vietnam

Are you a dairy farmer or food producer in Vietnam looking to import high quality breeder dairy cattle, sheep and goats into your local market? If so please get in touch and find out how we can help you today.
Goats
Sheep
Holstein Friesian
Jersey Cattle